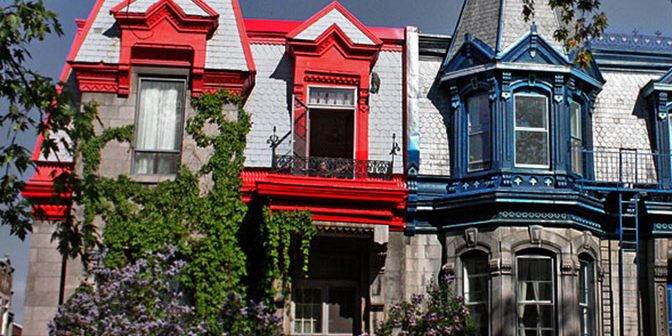 Abri du Voyageur Hotel is a Montreal hotel situated in the Entertainment District, near The Plateau. Our hotel is the ideal choice to discover the Plateau Mont Royal and Montreal’s major tourist sites without breaking the bank

The Plateau was formerly a working-class neighbourhood, with the Eastern part being largely Québécois, and the Western part largely Jewish. The neighbourhood was the childhood home of Quebec writers Michel Tremblay and Mordecai Richler and both have set many stories in the Plateau of the 1950s and 60s.

The Plateau is characterized by brightly-coloured houses, cafés, book shops, and a laissez-faire attitude. It’s the location of some famous attractions on Saint Laurent Boulevard, including Schwartz’s Deli (famous for its Montreal smoked meat), and a weekend street fair during the summer that sees extremely crowded streets. In 1997, Utne Reader rated it one of the 15 “hippest” neighbourhoods in North America.