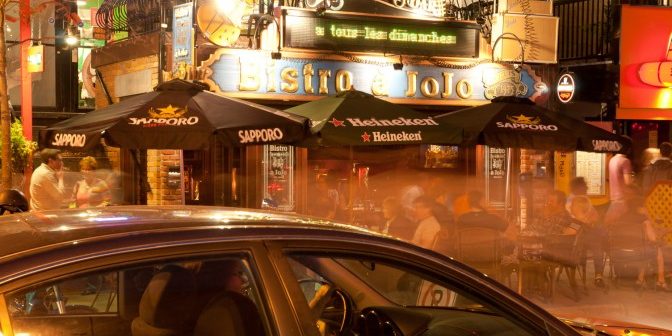 Abri du Voyageur Hotel is a Montreal hotel situated in the Entertainment District, near the Latin Quarter. Our hotel is the ideal choice to discover Montreal’s Latin Quarter and Montreal’s major tourist sites without breaking the bank.

The  Latin Quarter is an area in the Ville-Marie borough of Montreal, surrounding UQAM and lower Saint-Denis Street, between downtown and the Gay Village. It is known for its theatres, artistic atmosphere, cafés, and boutiques.

It owes its name, a reference to the Quartier Latin in Paris, to the presence of the École Polytechnique de Montréal and the nascent Université de Montréal in the 1920s. In the 1940s the university moved out and headed for a new campus on the north slopes of Mount Royal, far from the downtown borough. In the late 1960s UQAM was born and established itself in the Ville-Marie borough, giving a modern underpinning to the name. A large junior college, the CEGEP du Vieux-Montreal also moved in at about the same period.

The Grande Bibliothèque du Québec was opened in the area in 2005, joining the Cinémathèque québécoiseas a key cultural attraction.

This area falls within the boundaries of the new Quartier des Spectacles entertainment district, now being developed. The revitalization of the once seedy RueOntario between Rue Saint-Denis and Boulevard Saint-Laurent has been boasted by Montréalers as the New Montréal (Nouveau Montréal). This area, surrounded by theGayVillage, the Plateau, and Quartier des Spectacles, has been a focal point for attracting young professionals, artists and emerging musicians.