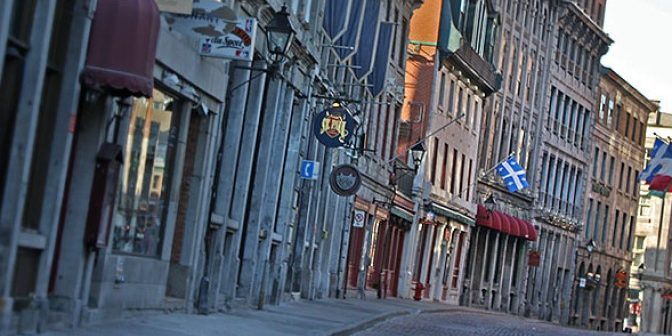 Abri du Voyageur Hotel is a Montreal hotel situated in the Entertainment District, near Old Montreal. Our hotel is the ideal choice to discover Old Montreal and Montreal’s major tourist sites without breaking the bank.

Old Montreal is a major tourist draw itself; with the oldest of its buildings dating to the 1600s, it is one of the oldest urban areas in North America. Historic European architecture and cobbled streets in Old Montreal have been maintained or restored to keep the look of the city in its earliest days as a settlement, and horse-drawncalèches help maintain that image. Place Jacques-Cartier is the usual haunt for outdoor performers, mimes, artists and artisans, nearby are such important buildings as Montreal City Hall, Bonsecours Market, and Notre-Dame-de-Bon-Secours Chapel. Further west, Place d’Armes is dominated by Notre-Dame Basilica on its southern side, accompanied by the Saint-Sulpice Seminary, the oldest building in Montreal. The southwest of the Old Port contains the important archeological remains of Montreal’s first townsite, around Place d’Youville and Place Royale, and in the Pointe-à-Callière museum. Montrealers and visitors alike can enjoy a wide variety of activities, including the Montréal Science Centre, with an IMAX Theatre, and the Montreal Clock Tower. Montreal’s Riverfront has access for walking, cycling, roller-blading, quadricycle, pedalo and Segway rentals.