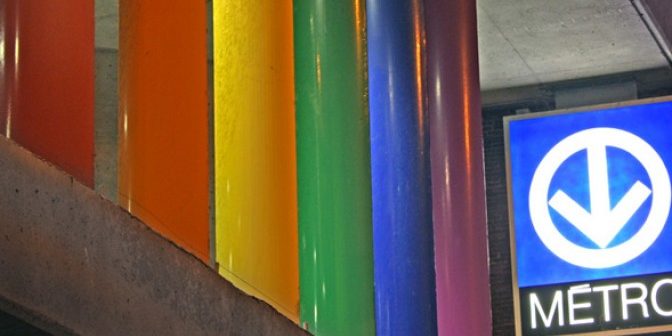 Abri du Voyageur Hotel is a Montreal hotel situated in the Entertainment District, near Montreal’s Gay village . Our hotel is the ideal choice to discover Montreal’s Gay Village and Montreal’s major tourist sites without breaking the bank.

Formerly a poor working-class neighborhood, the area was occupied by the gay and lesbian community after the huge expulsion of many gay businesses from areas closer to downtown. The area has become considerably gentrified, thanks in part to recent investment from all three levels of government, which are aggressively promoting the Village.

With the accepting climate of Montreal, and gay life in Montreal as a tourist attraction, gays and lesbians live all over the highly accepting city, so their residential density in the Village is only slightly higher than elsewhere. However, the Village contains a variety of shops and services targeting the community, and so serves as an entertainment and tourism centre. The Village contains a wide variety of nightlife: bars and discotheques catering to all tastes (Montréal has more gay bars and discotheques than Paris, and as many as San Francisco or New York). Montreal’s Gay village is also home to a wide range of boutiques, restaurants, cafés, bed-and-breakfasts, and major chain-style hotels.